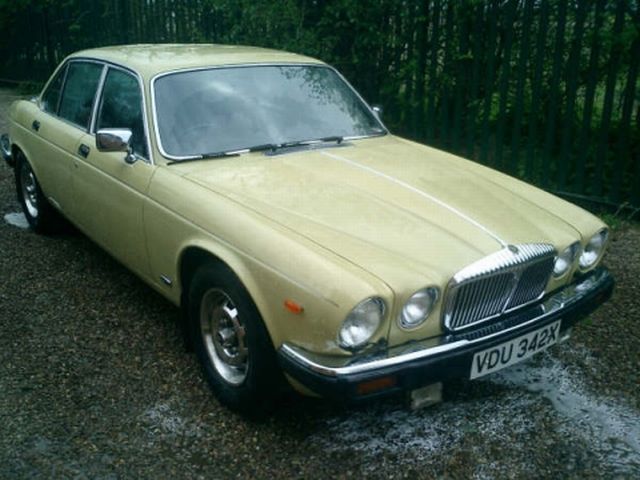 Possibly the best remembered of Arthur's cars was his yellow Daimler Sovereign Series III 4.2. This was the third car of this style to be driven by Arthur in the series and is probably best remembered as it was used at the time series was most popular on television. The real registration of this car is VDU342X and DYO979V was simply a prop. The car itself has a very interesting history since Minder finished filming with it in back in 1985. Scroll down for more information or view slideshow.

Everytime we finished a series we were told that was it and we weren't going to do to anymore, and then they would come back later and say yes we are going to do some more. And at the end of this particular series, which I believe was 1985, I was sitting in the Minder Jaguar and talking to the location manager and I said I must get myself a new car, because I was driving a rather battered Capri at the time.

He said, 'Well why don't you put an offer in for this Jag?' So I said, 'Yes, I might do that.' So he got on to Jaguar and said would they give it a good service and make me an offer I couldn't refuse. So they said 'Yes' and that was that. A couple of days later the phone rings, it was TV Times, they said 'I understand you're going to buy the Minder Jaguar?' and I said 'Yes'. They said 'Well we want it, because we want to give it away as a prize in a competition'. So I said, 'Well I'm sorry, I want it'. 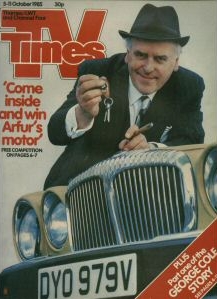 So a few days later they ring up again, 'If we get Jaguar to get you a very hefty discount on a new Jaguar, will you let us have the Minder Jaguar?'. So I sobbed a bit and said 'Yes, alright'. So then I went down to present it someone who'd won in the raffle. Then about three months ago (2003), I get a letter from the man who won it originally to say it was being raffled again in aid of Salisbury Hospice and would I go down and pick the winning ticket. So I said 'Yes', went down and picked the winning ticket, that was that. When they contacted the person with the winning ticket, he said 'I don't want it, raffle it again' and so it's now being raffled on the internet." George Cole

Mr John Maxfield owned the car between 1985 up until its appearance on ebay in 2003 and apparently it was either his sister or sister-in-law who won the original TV Times competition. Mr Maxfield promptly bought the car from her at that time. In 2002 he donated this car to Salisbury Hospice to raise funds for them. As mentioned above, the original winner gave the car back and it then appeared on ebay. The winner of the car on ebay at that time is fellow Minder fan Dez who until 2014 kept the car in the Nottingham area and collected the car from John Maxfield. The car is still in working condition and thanks to a previous owner Dez you can now take a look at it in its current home - to see more pictures of the car click view slideshow.

In 2014 the car featured in magazine article with its most recent owner, which featured shots of it taken at Arthur's car lot in The Vale, Acton.