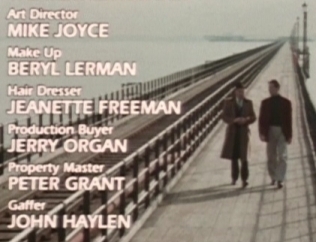 In 2004 minder.org approached art director Mike Joyce, who worked on the final three series of Minder to talk about his time on the show.

We would very much like to thank Mike for taking time out to talk to us.

Q. How did you come to be involved in Minder and what exactly was your role in the show?

I had worked with Chris Burke on a feature film in the North of England, directed by Paul Greengrass and called ‘Resurrected’ while between contracts as a freelance designer at Yorkshire TV. He was offered the Production Design of Minder by the producer, Ian Toynton and remembered me. So I got a call asking if I’d be interested Art Directing with him. Of course I said yes, once I’d spoken to the Production Manager, the lovely Laura Julian and I found out what they were offering. It meant a six-day week and renting somewhere for about 10 months near the studios in Greenford, West London.

Q. What was it like working with George Cole, Gary Webster, Nick Day, Steve Tompkinson and the rest of the cast?

A privilege. All of them were good people. George, as you’d expect, is a consummate actor – but he’s also a gentleman. He was possibly the most reserved of the cast but always said "Hello" in the morning and occasionally had a chat.

At the end of the first series we shot part of an episode in Bradford, West Yorkshire – which is where I was living at the time – and one of the exterior locations was a pub (the interior of which was being shot in London). The prop buyer managed to get a number of Bradford posters for the interior location so it looked as though it was the interior of the pub 210 miles away. One of these was a list of all the pubs in Bradford that the licensees had compiled so they could ban troublemakers. My end-of-term present was to have the cast and crew fill this in, so effectively I had the whole of my workmates ‘barred from Bradford’ in a frame on the wall in my Bradford home. Ian, the producer, was with George and Gary in their Winnebago when I approached them for a signing. He signed first. George looked and said “ I don’t think I should really sign this”, making me think ‘oh well’ - but he wasn’t being stuck up: he’d spotted one of the pub names on the list and continued; “ I don’t think I really want to be barred from somewhere called Arthur’s Bar” then he smiled and signed, followed by Gary.

Gary was great and was almost one of the crew. Nick Day used to pop into the Art Department with examples of his computer work. Glyn – Dave the barman – was equally wonderful, and very chatty. Steve? – I’m still mates with Steve. We bump into each other in the same pub from time to time.

Which leads on to another amusing story. The end-of-term party for Series 1 was held at the Kensington Roof Gardens, which is a swish club/restaurant. Steve and I had got on really well during the shoot and so were standing chatting when my wife returned from the loo. “And who’re you?” she asked. “Steve.” “And what d’you do on the crew?” “ I, er, act.” “ Oh. My – haven’t you got small ears.” Cue for laughter. A sequel to this happened several years later. I’ve been known to drink in a Soho club called Gerry’s and one day, early doors, Gill and I slipped down the steps for a swift glass of wine – to find Steven and Dervla with Neil Morrissey and Caroline Quintin. Having met my wife only once – at least five years earlier – Steve came to the bar, beamed and said “How are you Gill?” then tugged his ear lobes. Then he bought us a drink. The man has the memory of an elephant! If all this sounds ‘luvvy’ and gushing it’s certainly not meant to. The cast was the reason – like the series ‘Pie in the Sky’ afterward – that it was such a pleasure to go to work in the mornings.

Q. Is there anything in particular you can tell us about the making of the sets and the particular locations in which the later series of Minder were filmed?

The Winchester was a large set, with a movable column and walls, whilst the exterior location of the Winchester was a tiny bed-sit just off Acton Lane. The first time Chris and I saw it the location manager had no key so we had to peer through the letterbox. What greeted us was a view of a toilet pan and cistern. So you could never shoot directly into the club exterior and anyone coming in or going out of the Winchester had to do a nifty right hand wheel so they didn’t bump into the blackout frames masking the loo in the tiny hallway as the main (and only) room led off right. Each time we went there we erected the canopy and sign and hung a dummy window on the wall, then took them down again once we’d filmed. Ray's flat set and the Police Station were so large that one of the corridor entrances through a door led straight into Ray’s living room.

Q. Do you have any memories of how Minder ended and why the decision was made not to continue with any further series?

I don’t know why the series ended. My feeling was that George simply had had enough. It was a hell of a schedule – 6 days a week, on camera at 8.30am, finish at 6.30 minimum for about 10 months x 3. If that was the reason it would be perfectly understandable. The last shots were in a derelict bank that we’d resurrected. I was next to George when he finished and couldn’t help embarrassing him by saying what a privilege it had been to work with him.

Q. Where else can we find examples of your work and how does someone end up with a job like you?

Try my website, or repeats on various channels. As to designing, I attended an Exhibition and Interior Design Course at Art College but had always been obsessed with working for Gerry Anderson’s puppet film outfit. Which I did once I’d left College, until Century 21 changed tack and went into live action making all the puppet staff redundant, including those that had originally helped Gerry set up the company. I went back into exhibitions and interiors but my heart wasn’t in it. At the same time I wrote and made a pilot puppet film which I hawked to YTV. They liked it, and were equally impressed with my design work. Which led to me freelancing there for about ten years – designing almost everything but drama. So when ‘Minder’ arrived I jumped at the chance, even though it meant living out of a suitcase. But that’s the industry.

If you would like to see more of Mike's work, you can visit his own website here, where you can find detailed plans of The Winchester Club, Arthur's Lockup and the police station, all of which featured regularly in the last three series, as well as the barge from 'The Cruel Canal'.