This page details the various Minder books and publications that appeared over the years. Some are still available to buy, see 'Click for details' below. 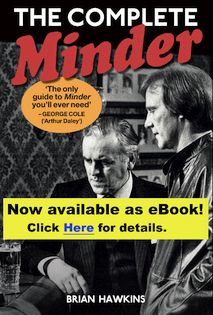 'The Complete Minder' is a revised and expanded edition of Brian Hawkins's groundbreaking 2002 book 'The Phenomenon that was Minder'. The Complete Minder seeks to bring the original edition up to date with material not available at that time. Among the additions is a discussion of Minder material not intended for general transmission (including the drug information episode and the elusive 'Number' premium bonds film); a discussion of the 2009 remake of the show by Channel Five; a new section on ‘Minder in Australia’ with a list of Australian first transmission dates; a contribution from Meic Povey; and an expanded discussion of the way that Thatcherism contributed to the show's success.

All serious Minder fans should have a copy of either 'The Complete Minder' or its predecessor on their bookshelves. Some fans might want to have both editions, but even the book's author Brian Hawkins feels that this would only be necessary for the most diehard out there! 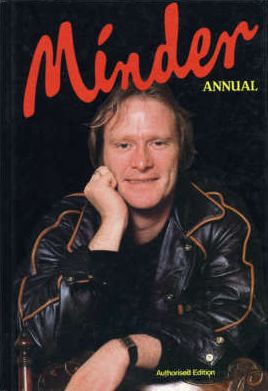 The original Minder Annual, published in 1980 was very much a vehicle for Dennis Waterman. It has several cartoon storylines in which Arthur seems to be sprouting a moustache, black shirt and white tie. It offers lots of information on Dennis Waterman. The whole annual seems more focused on Dennis Waterman and Terry McCann with very little mention of Arthur or George Cole. You can find out what Dennis thinks about his character of Terry, Dennis Waterman's acting career,  Dennis Waterman 'The Singer' and there is an insight into how an episode of Minder is made. This annual details some interesting behind the scenes facts about the production process for the series.

This book stands out from any other as it is created by the original creator of Minder, Leon Griffiths. The story is centred around Terry, who is sent to prison in this book and comes out trying to avoid Arthur. The novel is darker than the television series, and Arthur comes across as a more sinister, manipulative character. In the book we get a glimpse of Arthur's early life, of his relationship with 'er indoors, and how Arthur and Terry got together in the first place.

Terry had a small following as a boxer at the tail end of the sixties. Terry remembers Arthur first coming into his life in 1969. Arthur first offered Terry work after Terry was found guilty of diving in a fight which resulted in his licence being removed. After a year, Terry was so used to working for Arthur he decided not to go back into the ring. Some reference is made to this in #4.1 Rocky Eight & A Half. Although at times Terry didn't like the jobs he did for Arthur, he always showed 100% loyalty. This was due to a lack of any real alternatives and because of a big favour that Arthur had done him a long time ago, which Terry could no longer remember the details of.

Terry is 32 years old and has a criminal record as follows - aged 15 he got 6 months in a detention centre for screwing a TV rental shop, aged 23 he got 1 year for assault, aged 28 he got 2 years for GBH and now aged 32 he is in for an 18 month stretch (at the start of the book). This is a little inconsistent with the record the police quote in #1.1 Gunfight At the OK Laundrette in which the officer states "two years for GBH and "a three for attempted robbery". Terry's dream girlfriend is a Pan-Am stewardess, coincidental as in the first two series, Terry's girlfriend Penny (played by Gennie Nevinson) works as an air-stewardess.

Arthur's wife's first name is Sarah. In the book she is described as "45 but looks older" and is never referred to as 'er indoors at any point in the book. Arthur is a womaniser and seems to be having a long term affair with Pat Maxwell, described in the book as 30 years old and the manageress of the 'Funny Valentine' boutique near the Fulham end of the Kings Road. Despite Arthur's infidelity to his wife, he (somewhat hypocritically) doubts Pat's commitment to their relationship, which is over by the time you reach the end of the story.

Arthur respects family - 16 or 17 years ago Arthur was suspected of being involved in nailing Harry Pavitt's foot to the floor when it was rumoured that Pavitt abused one of Arthur's nephews.

Three separate novels written by Anthony Masters were released in the 1980s, originally priced at £7.95 each. The three books originally appeared in white with red, green and blue 'Minder' logos as shown here. 'Minder - Yet Again!' was also republished with a dark blue cover as shown here also. All three books were later rereleased with the title "Leave It Out, Arthur" a collection of all three novels in one, shown on the right. These stories are novelised editions of Leon Griffiths' original stores for (in the order presented in the book): #4.1 Rocky Eight & A Half, #4.4 Sorry Pal, Wrong Number, #3.13 In, #5.2 What Makes Shamy Run? and #1.9 Monday Night Fever. Extra material has been added to join the stories together.

The creator of Minder puts himself in the position of Arthur Daley and tells how to get along in life discussing such great topics as 'A gentleman's club', 'The Arthur Daley Workout', 'English as it's spoke and writ' and 'The Last Journey'. This book contains some very good cartoon illustrations of Arthur and Terry as well as photos from the series. Two editions exist, the newer version is shown on the right in red. The recommended selling price of the book when it first appeared was £2.95 and is described on its back cover as 'A personal message from the star of the internationally popular TV series Minder'. There is an excellent cockney rhyming slang guide at the back of this book in the lexicon chapter.

This annual contains both pictures and cartoon stories of Arthur & Terry. There is no background information to the series in this annual. 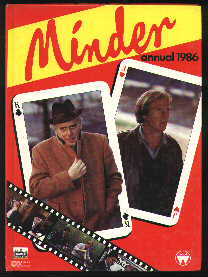 This is one of the more difficult to find Minder books. This was published in autumn 1985 for the Christmas of 1985, as series six was being shown on British television. On the front cover we see Arthur as the King of Clubs and Terry as the Jack of Hearts. As with the previous annual, there is no information on the series itself and it is simply a set of cartoon stories and puzzles. 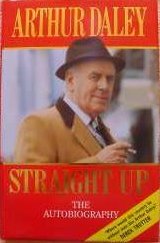 Published in 1991 by William Heineman Ltd., Minder's creator Leon Griffiths was also involved in the production of this book. This book also contains a foreword by Derek Trotter. 'Straight Up' was also made available as a 'talking book' for the Royal National Institute of Blind People (RNIB) read by George Cole. An audio version of this book was recorded by George Cole especiall for the RNIB. Another alternative audio version of Straight Up is believed to have been recorded by Robert Trupp for the Australian Listening Library.

In this book Arthur talks a little about his family and his past which is a little inconsistent with the TV show and tells us how he and Dave first made money with horse dung. He also wishes a farewell to Terry and introduces the character of Ray Daley. 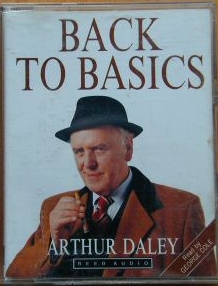 Arthur Daley, a man with a mission to get the country back on its plates!

This title was also released as an audio book (double cassette format) read by George Cole himself - a picture of which is shown here.

Not strictly a Minder book, but very much related to the series. This book was first published in 1985 and like most other books mentioned here is now sadly deleted. This book details most of the programmes produced by Euston Films including 'The Sweeney', 'Out', 'Widows', 'Special Branch', 'Reilly Ace of Spies', 'Fox' and of course 'Minder'. This book together with photographs charts the beginning of Euston Films and chronicles an in depth look of how the shows are produced from the drawing board to our TV sets. The book is packed with 228 pages of information. A behind the scenes guide on how an episode of Minder was filmed is contained here too.

TV TOPS was a UK kids magazine published weekly in the UK. Minder was adopted by the magazine in 1982, whereupon weekly Minder cartoon stories appeared with new adventures of Arthur & Terry.

Many of these stories are available for registered contributing users on the Minder forum: forum.minder.org. 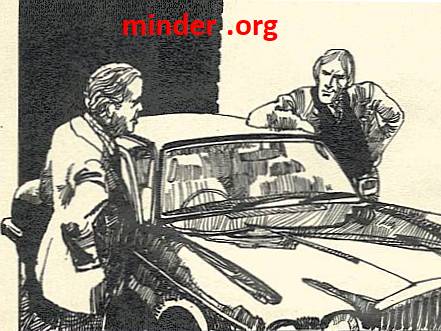