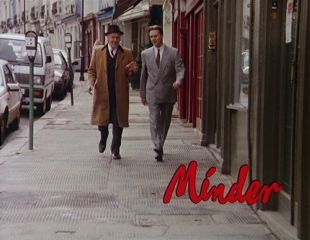 Dennis Waterman left the series in 1989, to be replaced 2 years later by Gary Webster as Arthur's nephew Ray Daley.

Now in its eighth series, Minder moved away from the more traditional tougher storylines and now the focus was placed upon the characters themeselves and there was more focus on the relationship between Arthur and his nephew Ray. The first ever episode to be transmitted was #8.1 The Loneliness of a Long Distance Entrepreneur written by David Yallop. He had also penned the final Dennis Waterman episode #7.6 The Wrong Goodbye. This opening story was an excellent start to the series where Arthur pays Terry a visit, only to discover Terry has gone to Australia to live. All Terry has left are his keys and his Capri in the driveway. Arthur is immediately in trouble as the local villainy realise he is without his trusty Minder. Enter Arthur's nephew Ray Daley, ready to help out as he needs a job, although his sort of help is not the sort Arthur needs at this time.

Although never formally mentioned in the series, Ray Daley was never really considered by most to be as tough as Terry. However after a fight at the Winchester in the first episode, Arthur believes Ray can handle himself and Ray soons finds himself as Arthur's new Minder. The focus of this new series was on 'family' as Arthur put it and the loyalty that was to exist between Ray and Arthur, albeit often one-sided. The storylines in this series were a move away from Terry's era, often based on contacts Arthur had known beforehand. The series also contained atmospheric incidental music (written by Alan Parker) which had not been present in previous series. The newer series was extremely popular at the time after being off screen for almost three years - the young Gary Webster proving somewhat of a hearthrob with young ladies at the time.

Interestingly, just like Dennis Waterman, Gary Webster had appeared alongside George Cole before they starred in Minder. In 1990, the pair shared a scene in a one-off ITV show called Life After Life in which George Cole plays a retired butler who moves into a retirement home. As he moves in, one of the removal men helping him to move in is none other than Gary Webster. To see this pre-Minder clip, click here (opens a new window).

The new series featured new opening titles. Similar to the Terry McCann Years the titles again set the scene of the show with a vehicle - this time with a van. Poor old Ray gets lumbered with a nice blue transit van, while Arthur gets into his Jag. Other than #8.1 The Loneliness Of The Long Distance Entrepreneur the only other episode to feature alternative opening titles would be #10.2 All Things Brighton Beautiful, this episode officially marked as being the 100th episode.

There has been some discussion about the number plate of the Ford Transit van used throughout the Ray Daley Years. OU116Y - some believe this is intentional and could be read out as "oh you, too sexy".

As mentioned about, both the final episode of the Terry McCann Years #7.6 The Wrong Goodbye and the first episode of the Ray Daley Years were scripts written by author David Yallop and the viewer can see only a few subtle links between the two episodes. Apart from retaining The Winchester Club and Glynn Edwards as Dave, both episodes also mention a contact of Arthur's in Yorkshire and Arthur's car lot is still at the same location in both series. Apart from that, there is very little that links the two series and there was an intention to move away from the Dennis Waterman era and place Arthur & Ray into the spotlight for this new series.

The new series of Minder featured many new characters and we see several appearances by Ray's girlfriend Gloria, played by the delightful Emma Cunningham. Other regular characters included Ray's parents Bert (Arthur's brother) and Bert's wife Doreen. Arthur's brother Bert was played by actor Sidney Livingstone, who had previously appeared as a casino bouncer in #2.3 You Lose Some, You Win Some. There was also new law enforcement on the manor.

Detective Sergeant Michael Morley was the new man in charge of the manor in 1991 and appeared in both series 8 and series 9. This new character was a different sort of copper to that of Chisholm, Rycott and Jones. Nicholas Day was cast as a last minute replacement and was told of his part while filming was already taking place. Several scenes needed to be refilmed on the very first episode to be filmed #8.2 A Bouquet Of Barbed Wine. Nicholas Day had appeared in many acting roles over years and has also worked for London Walks - doing a lot of work for environmental causes. In 2004 he appeared as Dennis Waterman's boss in the BBC series 'New Tricks'. Very proud of his role as Morley, he is also an occasional visitor to this site too who has helped contribute to the Locations section of the site.

DC Park appeared in series 8 and was introduced with Morley during the first episode. Since leaving Minder, Stephen has moved on to appear in a wide variety of TV and film roles, including 'Drop The Dead Donkey' & 'Ballykissangel' and few people remember him appearing in Minder. Jonty Stephens, who played Park's replacement DC Field, also pops up on TV every now and again. Other than Arthur, Ray, Dave, Bert & Doreen - there were no other regular characters in series 10, the final series of Minder broadcast in 1994.

Following the ninth series of Minder which saw Ray and Arthur head off on a three part trip to Australia, March 1994 finally saw the end of Minder at the end of series 10. With funding for the series already far lower for this final series, Minder was not renewed, part of Thames TV losing its licence as a broadcaster in the London area. The lack of funding in the final series also resulted in there being no return for Morley & Field in series 10, with no explanation as to why they left. Series 10 did see a return to the show of established writer Tony Hoare, who penned several episodes in this final series. Although certain one-off 'specials' were mentioned after the final tenth series, no funding was available due to one-off shows costing more (in relative terms) than an entire series. As a result, Arthur Daley never returned and that was the end of Minder, until a revival in 2009 saw a different Daley on the scene.

Many people were sorry to see the end of Minder after having many years of enjoyable viewing with Arthur, Terry, Ray and Dave. The end of the series with series 10 was also a disappointing time as this had seen the return to the show of regular script writer Tony Hoare, who had not written for Minder since series 7. In the UK, one week after the final episode was broadcast, the first ever episode #1.1 Gunfight At The OK Laundrette was repeated, preceded with a message from George Cole himself thanking viewers for watching the series.

In Arthur Daley's final message, George Cole hints that at some point Arthur might return, but sadly it was never to be. 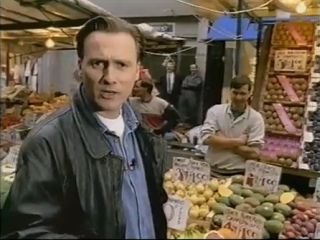 Since the end of the series Gary Webster has led a somewhat colourful life, experiencing and overcoming significant debt problems and suffering a heart attack in 2011. Along the way he has appeared in many other roles on TV, including an advertisement for a re-run of Minder on the UK satellite channel UK GOLD in the late 1990s (shown here). He also works as a producer and also does voiceover work. He also provided some commentaries for the series when Minder was released on DVD in Australia by Umbrella DVD in 2007.

To see more of what Gary Webster has appeared in over the years (both before and after 'Minder'), visit the 'Not Minder' over on our forum by clicking here.