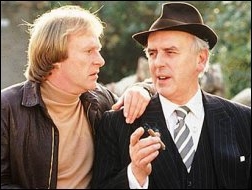 'Minder how you go' - 1985 Interview with Leon Griffiths 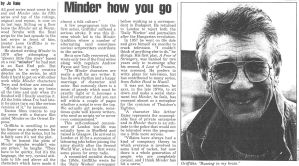 At this time Leon Griffiths was interviewed about Minder. To read this short interview, click on the image above.

Little did they know that at this time they were soon to become the duo that was Arthur Daley & Terry McCann - enjoyed by millions each week in the 1980s.

The superb 1970s police series 'The Sweeney' is really where the Minder story begins, also made by Euston Films. When 'The Sweeney' ended, Euston Films were looking for a new series for Dennis Waterman and the idea of Minder came along. Already an established actor, Dennis Waterman had become a familiar face on TV as a result of 'The Sweeney' and George Cole had appeared alongside him in this show in an episode called 'Tomorrow Man' in 1976.

When 'The Sweeney' ended and with Dennis Waterman already in place, Euston Films needed an actor to play Arthur Daley. Several actors were considered, including Denholm Elliot but eventually it was decided that George Cole would play the part of Arthur Daley. At that time Dennis Waterman had reservations about casting George Cole as he believed he was 'too posh' for the role. However, in no time the pair hit it off and it is reported that the pair worked very well together and had a great relationship both on and off screen.

The original series of Minder had a very memorable opening sequence, where Terry is considering whether or not to accept a white Ford Capri from Arthur's car lot. Although it is assumed that Terry does agree to take the car, the car itself is rarely seen in the series. Dennis Waterman stayed with the show for seven series, between 1979 and 1989. During these series, we learn much about the characters of Arthur & Terry, although very little about their backgrounds. Series 7 showed slight changes in the opening titles with black and white shots of Terry, Arthur and Dave the barman (played by Glynn Edwards), socialising at their favourite hang out, the Winchester Club. The series was by no means an overnight success, and it wasn't until around 1982 when Minder was in its third series that the show became a real success.

Keep an eye open during this opening sequence for the window of the Ford Escort in the car lot - notice anything strange happening? The final Dennis Waterman series kicked off with the 1988 90 minute Christmas special 'An Officer and A Car Salesman', with the show having been off the air for almost three years. It is been stated that each time a series of Minder was filmed, the cast and crew often thought it would be the last, with the series originally intended to finish with 'Waiting For Goddard' at the end of series six. A seventh series reintroduced Terry with him having served '18 moons in the shovel' (a prison sentence) as a result of some dodgy videos that Arthur had left in his flat. This would be Dennis Waterman's final series.

Throughout his time as Arthur's Minder, Terry got himself into all sorts of scrapes often being dumped on by Arthur at every opportunity. Where the earlier series featured far more grittier storylines than the later episodes, it is certainly true that on-screen violence in the later series was much less. This is one of the reasons why Dennis Waterman felt the character of Terry had run his course. He has stated publicly that the show no longer became about the Minder, rather about Arthur Daley.

The end sequence of the Terry McCann Years were always the same, featuring specially shot photographs never actually seen in any episode. They showed Terry and Arthur at various locations throughout London and again feature in our Locations section. For detailed information of the 72 episodes in 'The Terry McCann Years', including facts, locations and bloopers - visit our episode guide here.

Filming of the first series took place between the end of April 1979 until October 1979. The series opening titles were filmed one week before the the filming of the very first episode to be filmed #1.5 The Bounty Hunter which started (likely - but not confirmed) on or around the 23rd April 1979. Although the filming of a Minder episode generally took place over two full working weeks i.e. 10 working days but not at the weekend, with both pre- and post-production the total time to produce the finished product was usually about six weeks.  A notable exception to this 10 day filming rule was the second episode to be filmed #1.1 Gunfight At the OK Laundrette which took three weeks to film and was rumoured to have a larger budget the other episodes in the very first series.

Each week the episode would start and end with the very notable theme tune: I Could Be So Good For You from The Terry McCann Years, sung by Dennis Waterman. This was originally released on EMI records and can be found on The Minder Songs page. If you are looking for the song on CD, find this in our shop!

As the series progressed so did the relationship between Arthur, Terry and their local law, DS Chisholm and DS Rycott, played wonderfully by Patrick Malahide and Peter Childs. Both of the these actors have had very successful careers besides Minder. Patrick Malahide appeared in numerous TV and movie roles, including a notable appearance alongside Dennis Waterman in the action movie of the TV series 'Sweeney 2' from 1978. Sadly, Peter Childs passed away in 1989, just months after series 7 was broadcast. The character of Chisholm would appear in 24 episodes of first seven series and Rycott would appear in 15. Both of these officers had their sidekicks - Chisholm teamed up with DC Taff Jones, played by Michael 'Meic' Povey and Rycott alongside DC Tom Melish, played by Michael Troughton.

In the final series Dennis Waterman series, series 7, DC Jones was promoted to DS Jones - with Chisholm having moved on to become Chief Security officer for a security firm. In this final series Jones was accompanied by Scottish DC MacDonald for two episodes, played by Robin Cameron. Michael Troughton who played DC Melish has appeared in a number of UK TV shows which has included playing Alan B'Stard's assistant Piers Fletcher-Dervish in comedy series 'The New Statesman'. Michael has his own website here.

In 2007, Meic Povey (DS and DC Jones) very kindly agreed to be interviewed for minder.org - read the whole interview here.

Created by TSW (Television South West), this was shown briefly between 1988 and 1990 on CITV (Children's ITV) and featured the adventures of mice who lived in Oxford Circus underground station. George Cole provided the voice of Vernon, while Dennis Waterman was his sidekick Toaster. Vernon and Toaster were similar in many ways to Arthur and Terry, though whereas George Cole's voice of Vernon is clearly Arthur Daley-like, Toaster's voice is hardly recognisable as Dennis Waterman. Each episode was about five minutes long and although two videos were released at the time, they have long since been deleted.

Dennis Waterman left the series in 1989 after filming series 7. He was reported to be reluctant about leaving the series though felt the character of Terry McCann had done pretty much everything he could do and wanted more out of the character. Interviews at the time suggested he thought the show had become too focused on Arthur's character and that the show had become 'The Arthur Daley Comedy Hour'. Despite his departure, George Cole and Dennis Waterman remained good friends after Dennis's departure from the show.

In 1989 Dennis set about producing the film 'Cold Justice' that starred himself and Roger Daltery, based in America. This film is one of the few times Dennis starred in anything produced stateside and unfortunately the film was not as successful as he would have hoped and Dennis suffered substantial financial problems as a result.

Since 1989 Dennis Waterman has appeared in a number of different roles both in films, TV and pantomime. On television, Dennis appeared alongside Jan Francis and Leslie Ash as the character Thomas Gynn (a character similar to parts of Terry McCann) in the series "Stay Lucky" and with the late Joan Sims as the character Tony Carpenter in the BBC1 sit-com 'On The Up'. During the 1990s Dennis played ex-SAS man John Neil in the excellent 'Circles of Deceit'.

In 2004 Dennis Waterman was back a regular face on British TV in the police drama series 'New Tricks' as former Detective Inspector Gerry Standing.
The series four episode "Powerhouse" filmed in 2007 saw Dennis starring alongside his former Minder co-star George Cole once again!

Click here to see the IMDB entry for Dennis Waterman.